If you understand an idea: “DO NOT WORK FOR MONEY, BUT LET MONEY WORKS FOR YOU”, you are on the right place. Poor people keep money in the bank and are scared to invest money, but rich and successful people always look for opportunities and invest own money to many sources. Have you ever heard about digital currency like Bitcoin? Even if YES or NO, I am not going to explain you BitCoin in details, but something more powerful and stronger. Friend of mine has explained me recently FUTURE of Digital Currency called UToken and I have become very interested. Even if I did not understand, I have invested USD1,000. I was 100% confident and sure what I have done. I see huge opportunity to have extra ordinary income, because the future of digital currency is UToken. On this post I would like to share with you what is Utoken about. When you grasp this opportunity, you will not regret in the future, because Digital Currency UToken WILL MAKE YOUR MONEY WORK FOR YOU!

Where is UToken coming from?

UFun is already in many Asian countries (with physical offices)

UTokens is a growing digital currency that has a gold reserved to assure the value of the UTokens. With UToken you can do:

What is the most important It is safe, because UTokens has 22% gold reserved system with 3 major banks. UTokens is Guaranteed Growing towards US$10. After which, it will be listed on stock market for higher potential growth!

Bitcoin is a pioneering payment system which was introduced as open-source software in 2009 by developer Satoshi Nakamoto. As you can see, it only started going up in 2013, but it started in 2009. Why did it take so long for it to go up?

Because of all these “positive gaps” UToken was born!

In just the first year, UToken started with a value of .1 on 1-14-2013 and rose all the way. Ever since UToken Reserve was established, there was never a shortage of UTokens and a need for splits, and possibility of oversupply of UTokens is prevented as well. It is well regulated, and the rise of the UToken is now steady with nothing breaking its path of incline this time.

In order to build a solid base for UToken to spread widely and rapidly to all around the world, the Company has decided from 28th October 2014, the price of UToken will be adjusted to USD 0.10 per unit! Under the principle that UToken value remains unchanged, the quantity of UToken in Users’ hand will be automatically enlarge accordingly! 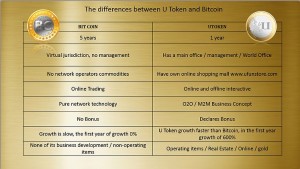 I’m Nishanth Muraleedharan aka "Nishani" and I know that I have come into this world with a clear purpose and mission: • To help people to have financial freedom & more free time by doing Internet based Home Business. I've been involved with Internet based business for over 15+ years now. Some of my inspiration comes from Mark Zuckerburg, Sergey and Larry Craig