Ecommerce businesses should anticipate a 265% growth rate, from $1.3 trillion in 2014 to $4.9 trillion in 2021. This shows a future of steady upward trend with no signs of decline. 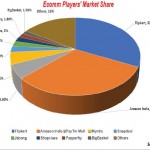 Traditional brick & Mortar business will be in real trouble soon, if they don’t go online ASAP. Reliance also entered the Ecommerce platform and trial run is already going on with grocery items in Mumbai. Mukesh already mentioned that they are going to get a big chunk of business from Amazon soon.

But Amazon.com Inc CEO Jeff Bezos who is in India now said today that his company will invest $1 billion to bring small and medium-sized businesses online in India and expects to export $10 billion worth of India-made goods by 2025. 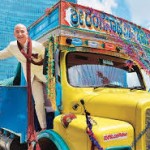 Bezos’ visit comes amid strident criticism from small business owners who accuse the company and Walmart’s Flipkart of unfair business practices. The companies deny the allegations.

The Competition Commission of India (CCI) has also just launched a probe into Amazon & Flipkart.

Bezos spoke today at a company event at New Delhi’s Jawaharlal Nehru stadium that it has described as “a first-of-its-kind mega summit” to bring together more than 3,000 small businesses.

Bezos’ schedule has been kept tightly under wraps but sources have told Reuters he has sought a meeting with Prime Minister Narendra Modi and other government officials.

India’s business owners allege Amazon is driving them out of business by offering sharply discounted products and favoring select big sellers on its platform. The company has maintained it provides opportunities to more than 550,000 sellers to use its platform and grow their business in India.

The Confederation of All India Traders (CAIT), a group representing roughly 70 million brick-and-mortar retailers, has said it will protest across 300 cities during Bezos’ visit.

we are now a FBA Prime seller in Amazon, and also selling products in Flipkart, PaytmMall, Snapdeal & ShopClues.

Just listed a product in flipkart to test the marketplace and all items got sold out in hours. In Amazon, just get FBA approval and then sit back and relax and scratch your head only in identifying products and sending it to there warehouse. Amazon will take care of your business after that.