We already have trillion dollar companies. How soon can we have our first trillionaire?

A recent study by Comparisun shows that Jeff Bezos could become inaugural member of the 13-figure club by 2026, at an age of 62 . 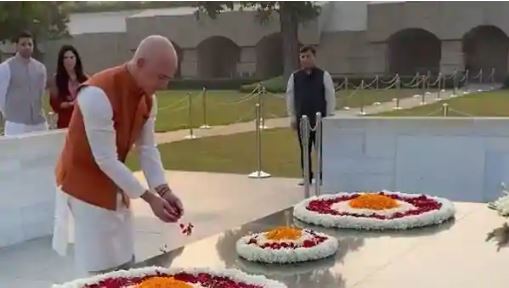 Comparisun analysed historical valuations of world’s richest companies and individuals in an attempt to predict when they’ll join the trillion dollar club. Chinese real estate tycoon Xu Jiayin will follow Bezos to become the second trillionaire in the world in 2027. Alibaba’s Jack Ma could become a trillionaire in 2030 when he will be aged 65. Facebook founder Mark Zuckerberg could gain trillionaire status almost a decade later than Bezos. But Zuckerberg’s current rate growth would see him worth $1 trillion, when he will be just 51 years old, said the study. 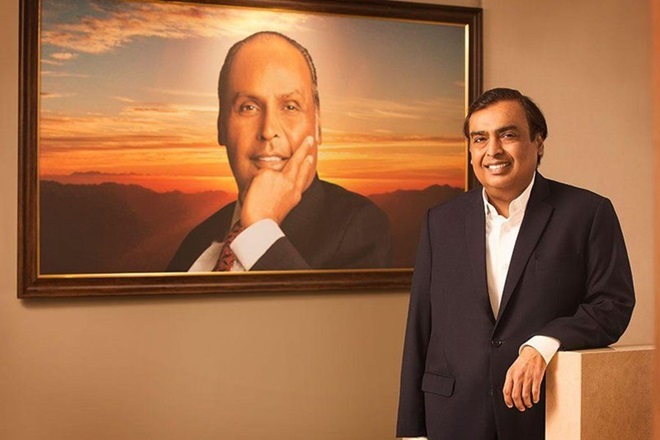 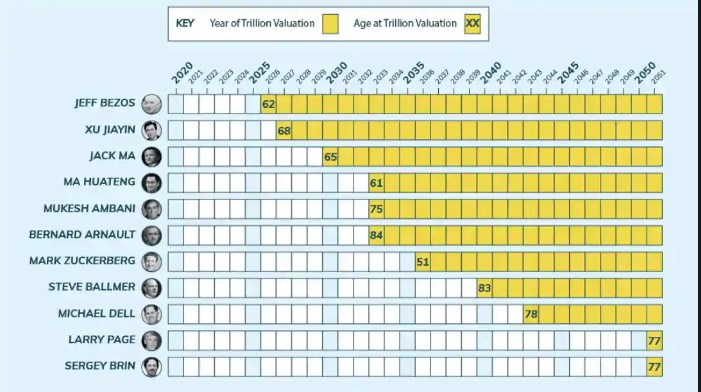 Amazon founder Jeff Bezos is still by far the world’s richest person and his net worth has grown by 34 per cent on average over the last five years, said the study by Comparisun, a company which helps organisations compare different business products.

Bezos is currently worth $143 billion, according to Bloomberg, and Comparisun calculated that the Amazon CEO’s net worth has increased by an average of about 34% in each of the past five years.

Bezos’ wealth has continued to grow steadily, even with ex wife MacKenzie getting roughly $38 billion of his Amazon stake as part of his 2019 divorce settlement. Overall, Bezos’ net worth has more than doubled since 2015, when it was around $63 billion, according to Bloomberg.

If that pace of 34% annual growth continues, Comparisun says, then Bezos’ total net worth could top the $1 trillion mark before the end of 2026, at which point he’ll be 62.

Comparisun’s projection “makes a lot of assumptions,” most notably that Amazon’s incredibly strong performance over the past decade — which has fueled Bezos’ net worth growth — can continue at the same strong pace for several more years, even as the American economy embarks on what is expected to be a downturn that could last several years.

Of course, Amazon has fared much better than many other companies in recent months amid the pandemic and resulting economic crisis. For instance, Facebook’s stock price is down slightly from the start of 2020, while Amazon’s is up by roughly 25% since the beginning of the year as retail closures and stay-at-home orders have resulted in an uptick in online orders for the e-commerce giant.

Because the bulk of Bezos’ personal wealth is tied to his more than 50 million shares of Amazon stock, the company’s booming business also continues to boost his own personal fortune. But that’s far from a guarantee that his net worth will continue to enjoy 34% annual growth over the next several years.

In 2018, CNBC’s Robert Frank noted that Amazon would need to reach a share price of more than $12,600 per share (the company is around $2,377 per share as of Friday) in order for Bezos to reach a net worth of $1 trillion, due to the fact that his own wealth is so closely tied to the company’s market value. And that was even before Bezos’ Amazon shares shrunk somewhat due to his divorce and various Amazon stock sales he’s used to fund his space exploration company, Blue Origin.

With Bezos’ current Amazon stake equal to roughly 11% of the company, Amazon would need to reach a market value of nearly $11 trillion by 2026 in order to make its founder a trillionaire in line with Comparisun’s projection.

Regardless, Comparisun’s projection is still worth noting, if only because it shows just how wealthy the world’s wealthiest person could be if his remarkable recent run were to continue, relatively unchecked, for several more years. Bezos may not really become a trillionaire by 2026, but the fact that his current trajectory could put him near that mark helps to highlight just how rapidly he has managed to accumulate even more massive wealth over the past five years.

Meanwhile, Comparisun’s prediction has been met with some backlash online from people who are offended at the idea that Bezos’ wealth continues to increase even as the economy suffers and tens of millions of Americans have lost their jobs over the past two months.

Many critics took to Twitter to voice their displeasure at the fact that Bezos’ wealth could continue to grow exponentially while so many others suffer, including Sen. Elizabeth Warren, who called Bezos’ path to trillionaire status “immoral” and reiterated criticism of Amazon’s treatment of its warehouse workers. 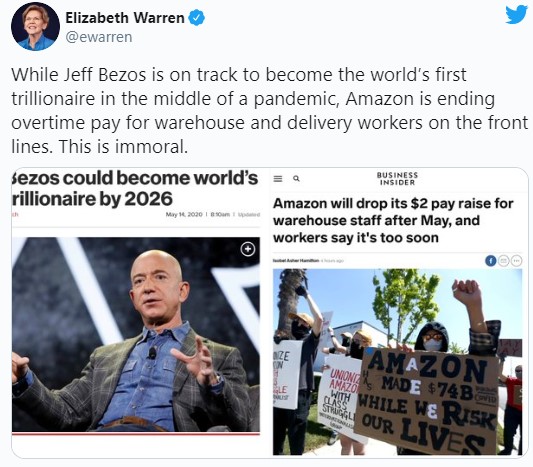 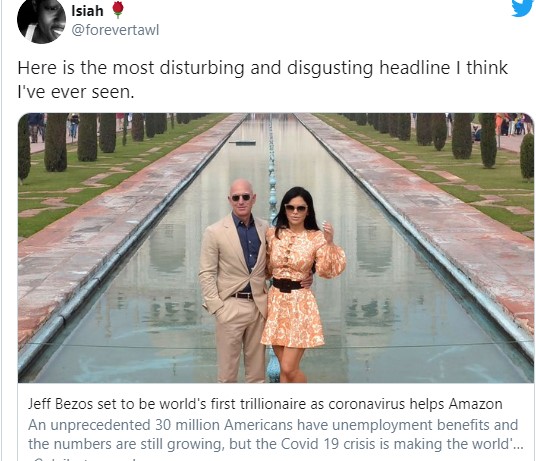 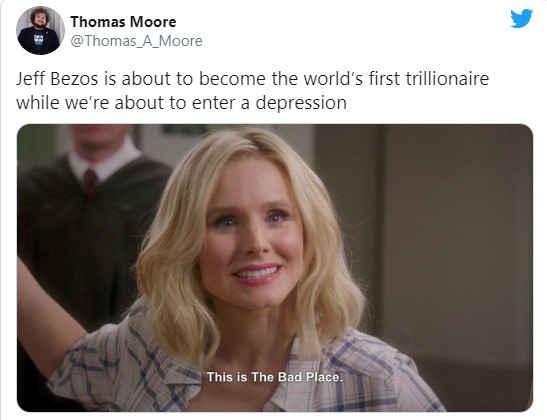 Talk of Bezos’ potential trillionaire status follows public protests by Amazon employees over their safety as they continue to work during the corona virus pandemic. On May 1, workers for Amazon and other companies including Instacart held a strike protesting a lack of “adequate protection in the workplace.”

Amazon said it spent more than $800 million in the first half of 2020 on safety measures including masks, hand sanitizer and additional hand-washing stations at warehouses. The company also hired 175,000 new workers to keep up with demand as millions of consumers’ lean on Amazon to have goods delivered while stuck at home.

This is not the first time the Amazon CEO’s immense fortune has faced scrutiny. In January, Bezos revealed Amazon would donate $1 million Australian dollars – or $690,000 in U.S. dollars – to wildfire recovery efforts in Australia. However, critics blasted Bezos for not doing enough in light of his wealth.

Homepage » Make Money » Even as the pandemic rages across the world, the world’s richest are estimated to grow their wealth exponentially.
← Previous Post Next Post →